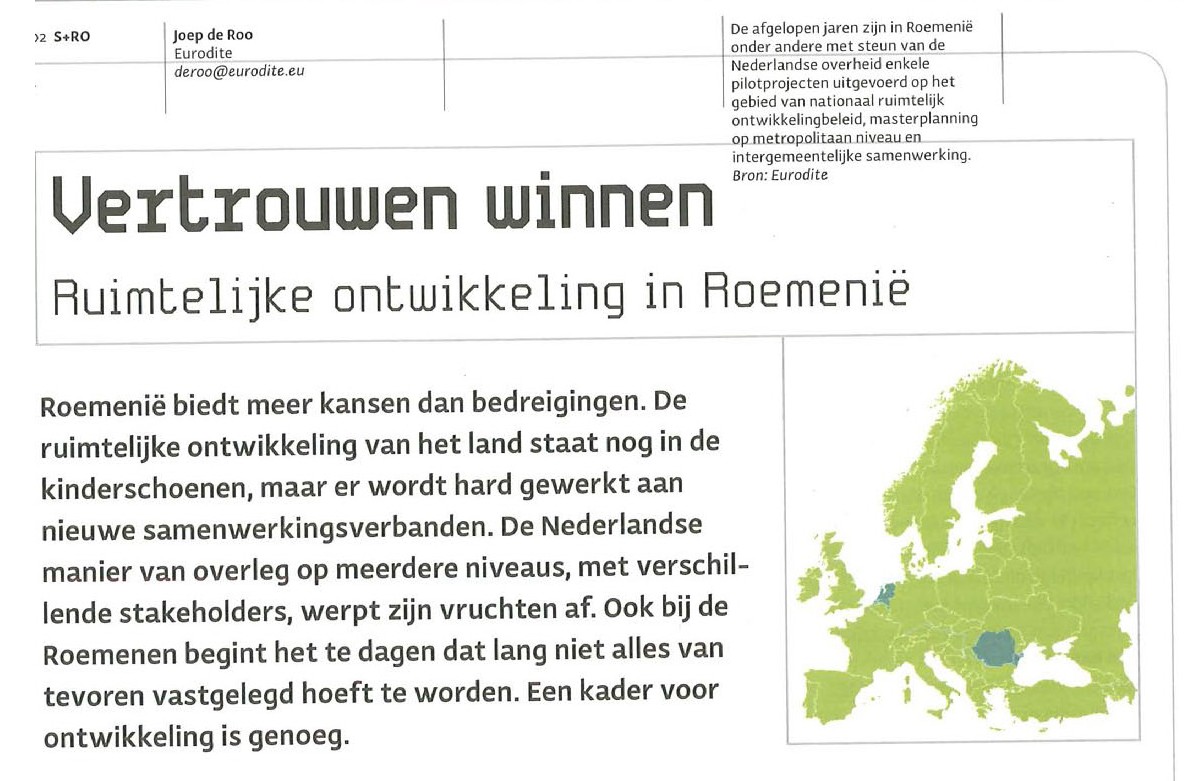 Romania, member of the European Union since 2007, begins to appreciate and better exploit its medium term development opportunities. Growing pains and issues of land use planning are accompanying this growth.

The image of Romania given by the press and politics in the Netherlands is not positive. Images of skimmers, underpaid workers, poor people, corrupt politicians and recently nuisance causers are the familiar images. In addition, there is the fear among Dutch politicians that if the labor market opens to the Romanians (and Bulgarians), an unstoppable exodus of unskilled labor will be heading west.

Romania, a country about six times as large as the Netherlands, has much natural beauty and a geological situation that offers many development opportunities in strategic economic sectors such as agriculture, tourism, logistics and renewable energy including hydro, wind and biomass. The combination of relatively low wages and highly trained staff is Romania is still a popular location for labor-intensive industries like the IT industry, car industry and textiles.

Controlled growth
In recent years, many changes occurred in Romania, that paved the way for better development of the economy and of the governmental systems of the country. Much money is reserved for the construction and renovation of roads, railways, airports, water safety and sanitation but also for investments in machinery and training of workers. For many of these investments, Romania is still dependent on subsidiesand loans of international institutions like the EU, IMF and World Bank.

Many lessons are learned from countries that joined the EU before Romania, and in some cases invested unilaterally in a sector. (Eg real estate in Spain, Ireland in the financial sector).Romania is currently investing in all three main sectors of the economy, namely agriculture, industry and services, creating a diverse economic system, which will lead to a steady economic growth in the country.

Romania has in recent years build up experience with the process of public investment in the form of procurement, public-private and public-public partnerships, (pre)-feasibility studies and environmental impact reports. No easy task for a country that has known 45 years of terror-communism, and 15 years of turbo-capitalism. Moderate and controlled growth needs time and will not happen overnight.
In recent years, many contracts failed due to mismanagement and abuse of procedures. The absorption of EU funds is still below standard. Yet in recent months, measures have been taken to ensure that Romania will perform better in terms of absorption of funds and regional development. The appointing of a Minister of European Affairs should avoid the fragmentation of the various operational programs. They will also exchange the principle of “first come first serve ‘for EU subsidies for a much better, impact assessment of grant requests. For the time being,these are still announcements, but it is a sign that awareness is growing in the Romanian politics about the limits of donations and the need for real implementation of the necessary reforms.

Many of the investments will have an impact on spatial development of regions and cities. The Romanian government has not yet developed a clear framework or doctrine for a Spatial Strategy, to control or support these investments.

Spatial-economic investments offer excellent opportunities to absorb available EU resources and improve living conditions. In order for this to happen, a level of cooperation is necessary between the departments responsible for infrastructure planning and the departments dealing with EU funds, at national, regional and urban level. This is not an easy match.

The Romanian government is still highly centralized when it comes to investments and land development. There is no national vision of urban development. Many of the projects supposed to be implemented at local level with EU money are assessed in Bucharest, without a clear framework. This often leads to political arbitrariness in the project approval. One example is the development of a tourist route along the Black Sea, in the port city of Constanta. The city would like to build this with EU money but will get no support from Bucharest. Even more – the Ministry has very different plans for the area and is now busy with the implementation of its own plans.

Within urban communities, multiple strategies,oftencompletely independently created,applysimultaneously. The two most applied local plans are the General Urban Plan (PUG) and the Integrated Urban Development Plan (PIDU). The first is similar to the Dutch zoning plan; the second is the urban and metropolitan development strategy that indicates how the EU Structural Funds can be used within the metropolitan area. Neither of the plans is currently controlling the development of the Romanian cities. Urban planning in Romania is mainly a theoretical exercise, with no real implementation. The projects that were performed, were often not previously scheduled or announced and were conceived in a shadowy arena of private developers and local politicians, often with own interests in the projects. A striking example is the development of three parking garages in the center of the capital,executed by the company of the husband of the now ex-minister of urban development. Another metropolitan example is the major axis Berzei – Buzesti one of the main squares of the city, which must connect the PiataVictoriei Square with the southern side of the city, through a large boulevard which would lead toPeople’s Palace (Ceausescu’s palace). Although this project has been talked about for years, the clearing of this axis begun without official notice. Many buildings, some with historic value, were torn down.

Masterplan
Better planning, coordination and compliance on national and local level would lead to greater absorption of available resources, more support for the implementation and therefore greater development of strategic sectors. The Romanian authorities are slowly recognizing this situation. For the next EU programming period (2014-2020), the Ministry of Regional Development and Tourism are anxiously looking for a planning and land use doctrine that can help control investments at national and local levels and to better implement them spatially. The agenda of the European Union and best practices from Europe will be taken as example. The development of a national spatial strategy has been necessary for many years, but there are difficulties in capturing the different views of the various ministries in a single document.

At regional and local level, there are also initiatives to build a more structured experience with decentralized governance and investments. A few pilot projects have been implemented in Romania in the past years, with support – among others, from the Dutch government, in the field of national spatial policy development, master planning at metropolitan level and inter-municipal cooperation.

The strength of themethodology used by the Dutch experts is especially in the creation of consultation structures at multiple levels, the involving of various stakeholders in the visioning and the creation of abstract forms of spatial economic planning for the future, in which not everything is fixed, but a framework for development is drawn. For the Romanians, this is often new. The renewed interest of the European Union for more ‘place-based strategies’ confirms that each region has its own dynamics and different investment needs.

Future image
In Romania there is progress in thinking about public-private partnership. The government is busy creating frameworks in which such models can be applied. The trust between public and private parties is still low. Not surprising in the context of the history. The government has recently published a number of priority projects that they want to develop through public-private partnerships. Large projects like the construction of a canal from Bucharest to the Danube, the development of a bridge over the Danube at Galati, the development of (renewable) energy networks, airports, highways, but also some large-scale urban area developments in Bucharest and projects in the field of cadastral records and further consolidation of agricultural land.
The companies in Romania begin also to contribute to spatial planning and pay more attention to the environment. The designs of buildings are more sustainable and start to include the use of public space as well.

The coming years promise to be turbulent years of development for a country that has much catching up to do in the field of sustainable and transparent governance, civil society, economic development and infrastructure projects. The Romanian government must show that it is able to make plans and implement them over time, without short-term personal and political interests. The promise of real progress in spatial development in the country is yet to be seen in the coming years. It is clear that development in the backyard of Europe offers opportunities for Romanians but also for foreign companies and government institutions. Despite the image, this region offers many more opportunities than threats. 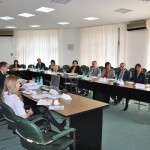 Urban system Braila-Galati: a new metropolitan area at the end of the Danube