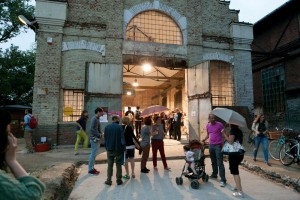 [ezcol_1half]  The opening of the Carol Factory Night powered by Eurodite and Zeppelin on 23 May 2014 was a success with an estimated number of 2000 visitors. The event took place during the Romanian Design Week and was part of the Bucharest White Night of the Galleries. With this premiere the Carol Factory (Halele Carol) has made its first step to become a cultural hotspot in Bucharest and we are proud to have reached this milestone in the process of transformation. Together with our partner Zeppelin and the factory owner we will continue our efforts to organize more events, a terrace and a cultural calender soon to come!

During one long evening the factory turned into a festival terrain with a bar, beer and Romanian sausages to be enjoyed on the central terrace, a bicycle exhibition and a demonstration of the bicycle activism in Bucharest in ‘sala compresoare’, a lecture night at ‘sala galvanizare’ with a word of welcome by Mr. Huub Drabbe von Frijtag, economic counselor at The Embassy of the Kingdom of The Netherlands and presentations on transformation of heritage and energy from bottom up initiatives and what it can mean for the quality of the city by Dutch and Romanian guests (Mr. Egbert Fransen – Pakhuis de Zwijger; Mr. Doru Frolu – DC Communication; Mr. Jeroen saris – De Stad bv; Mr. Jaap Modder – Brainville). The evening in ‘sala galvanizare’ was concluded with the screening of the movie Metrobranding on nostalgia of Romanian factories as part of the new Urban Eye Film festival. Outside, for many more hours, people enjoyed the terrace under the trees of the Carol Park and with the ambiance of the industrial halls around.

We thank the Embassy of the Kingdom of The Netherlands for their support to this event.