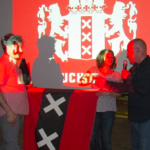 Bucharest has now an Amsterdam City Embassy, officially launched by Pakhuis de Zwijger (Dutch platform for urban development and bottom-up initiatives). Constantin Goagea (Zeppelin) and Meta van Drunen (Eurodite) who set an example with the transformation of an industrial complex into a meetingplace and new cultural hotspot in Bucharest: Carol factory/ Halele Carol received the plaquette of ‘Amsterdam City Embassy’ and the flag of Amsterdam from the hands of Egbert Fransen (Pakhuis de Zwijger) during his presentation at the Carol Factory Night on 23 May.

The launch of the Amsterdam City Embassy was part of the  Metropolitan Field Trip Boekarest.

The aim of the City Embassies is to establish a network of (inter)national cities and city makers who focus on urban innovation issues. 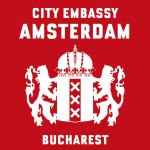 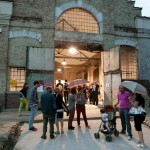