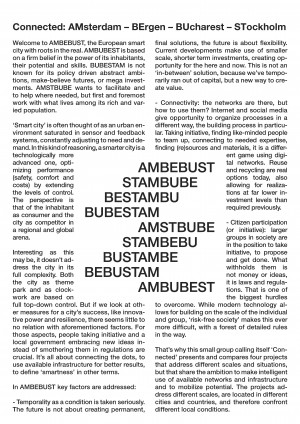 On Thursday November 6, we invited you for a Connected Symposium in Amsterdam. Representatives of all participating cities in the Connected project were there. Symposia have been organized in Bergen and Stockholm, the one in Bucharest on November 11  concluded the series.

13:30 — Cycling tour starting at the Tolhuistuin, Buiksloterweg 5c in Amsterdam-Noord. The tour will go along De Ceuvel and Buiksloterham self-built area. At all locations, experts will explain the main goals and backgrounds. The meeting point is close to the ferry stop.

15:00 — Start of the program at New Energy Docks, Distelweg 113 in Amsterdam-Noord. The introduction is by Arjen Oosterman (chief editor of Volume) followed by dispatches from Bucharest (Stefan Ghenciulescu), Stockholm (Jan Rydén) and Bergen (Hakon Iversen). Joep de Roo will share his views from a European perspective. Jacqueline Tellinga will introduce the highly innovative self building housing program of the city of Almere. With this input the audience will be invited to join the debate moderated by Jaap Modder.

20:00 — Start of the evening program at Pakhuis de Zwijger, Piet Heinkade 179. The Bucharest Field Trip Revisited, Who Rules the City Part II: The social capital Bucharest-Amsterdam. In May 2014 a group of Dutch planners, urbanists and politicians went on a field trip to Bucharest to discover the creative energy in a city that in terms of management couldn’t be further apart from Amsterdam. What did they discover and how do Bucharesti see the development of creative Amsterdam? Organizers Joep de Roo and Meta van Drunen will shortly explain the goals and discoveries of the trip. Constantin Goagea and Stefan Ghenciulescu will highlight some interesting case studies from Bucharest. Jaap Modder will present what he learned from the city.

More information about Connected and the Connected Symposium: www.citiesandpeople.eu and on this website. 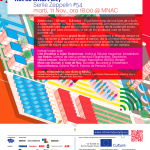