Four debates took place parallel to the the Connected exhibition. The Bucharest debate on November 11 by Eurodite and Zeppelin and Amsterdam on November 6 by Archis were the last ones in the series of 4 after Bergen on October 15 by NUDA and Stockholm on October 14 by Färgfabriken.

Amsterdam
The day started with a cycling tour in Amsterdam-Noord (Tolhuistuin, De Ceuvel and the self-built area at Buiksloterham), followed by a debate at New Energy Docks with representatives from all participating cities. Joep de Roo shared his views from a European perspective about urban developments. Jacqueline Tellinga, project leader of the City of Almere, introduced the highly innovative self-building housing program of Almere.

In addition to the Connected symposium, an evening program was held at Pakhuis de Zwijger. Topic was the Bucharest Field Trip Revisited, Who Rules the City Part II: The social capital Bucharest-Amsterdam. Joep de Roo and Meta van Drunen explained the goals and discoveries of the field trip to Bucharest in May this year. Constantin Goagea and Stefan Ghenciulescu highlighted some interesting case studies from the Romanian capital, amongst others Halele Carol.

The central question of the symposium was: smart or not so smart city? The first part consisted of a presentation by Arjen Oosterman about ideas behind the concept of a smart city, with several examples from all over the world. Together with Lilet Breddels, both of Archis and Volume Magazine, they were part of the first debate, moderated by Håkon Iversen of NUDA.

Secondly, Diana Marincu of Fabrica de Pensule in Cluj and Jan Rydén of Färgfabriken in Stockholm presented their institutes. A central question was how to deal with cultural places in the digital age, where both institutes relate to. The following debate was moderated by Meta van Drunen.

Connected
The aim of the Connected project was to have an exhibition and debates to get into discussion with the relevant stakeholders in each of the cities on the current trend of urban developments. Also, investigate how to respond best to the urban needs making use of the power of innovation technology and smart citizen communities. The exhibition was open from October 1 until November 12 simultaneously in all 4 cities. 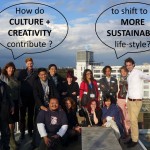 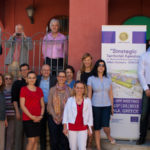